On March 24, the entry for the Academy's blog was a character rotation by Richard Gaines, a new student who relocated from Florida to Burbank to pursue his education in animation and to further develop his burgeoning career.

Here's the rotation he did for the character he created as part of his class assignment.

Once the design of the character had been fully established, Richard embarked on the next phase of the class, bringing the character to life through a series of facial expressions. Here's the drawings that Richard created as part of this assignment. 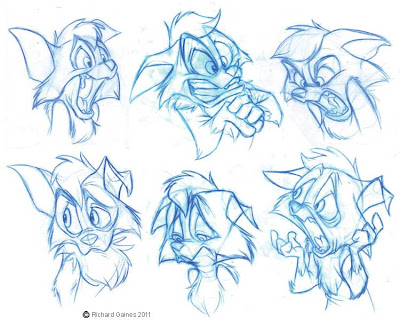 Facial expressions are important in fully developing the character, and are also a significant aspect of character based production development in animation. They challenge the character designer to explore the nature of the character through its personality and enhance one's acting abilities as it relates to the art.

Richard is a very talented artist who has become even better since he enrolled at the Academy. Good things are happening for him career wise as a result.

If you're looking to develop your own abilities regarding character design and your art skills in general, The Animation Academy can help you take a big leap forward. With our expanding Online Program, we can help you grow artistically no matter where you may be.
Posted by Charles Z at 11:17 AM