Kevin Poythress turns it on

Character rotations are a very important aspect of the character design process. Rotating characters for model purposes is an essential skill for anyone aspiring to master the art.

Kevin Poythress has been featured before on the Academy's blog on June 12 and August 11 of last year. This presentation was a class assignment that he recently completed. Kevin's 5 pose rotation in blue pencil was cleaned up in black line and then digitally colored. Click on the image for a better view. 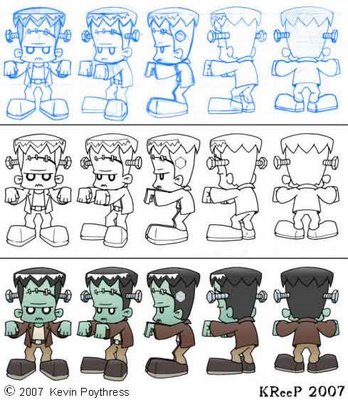 Afterwards, Kevin took the next step and created an animated sequence featuring his completed rotation. If you want to see the accuracy of a rotation, the best way to view it is through animation. It's evident that Kevin did a fine job.

Kevin Poythress is one of many students at the Academy who develop strong basic skills at a professional level. I'm happy to be able to feature his work as he contributes to the legacy of our school.
Posted by Charles Z at 1:21 PM No comments:

For the Adult Session of our next semester, we have four of the animation industry's top artists coming to the Academy for a visit with our students. We'll be enhancing our normal curriculum with presentations from Stephen Silver, Paul Felix, Aaron Horvath and Richard Chavez.

Stephen Silver is an outstanding character designer with several published books of his work. Nickelodeon's "Danny Phantom" and Disney's "Kim Possible" are among his most popular projects.

Paul Felix is a leading Visual Development artist at Disney Feature Animation. His credits include "Tarzan", "Mulan", "Lilo and Stitch" and several films currently in development.

Aaron Horvath is a character designer formerly of Disney and currently designing projects at Nickelodeon.

Richard Chavez is head of Visual Development at Sony Pictures Animation. His many credits include the legendary "Batman" TV series from Warner Bros, Disney's "Mulan", Art Director on DreamWorks' "Prince of Egypt" and most recently Sony's feature film "Open Season".

Our guest speakers are amazing talents and will be supplementing our usual classes on Tuesday evenings. Semester 10.2 will begin March 6, 2007 with Stephen Silver appearing a week later on the 13th. Our schedule for the next semester will be updated soon on the Academy's website. For further information feel free to contact the school.
Posted by Charles Z at 6:04 PM No comments:

Happy Birthday to us! The Animation Academy celebrates its Ninth Anniversary today! 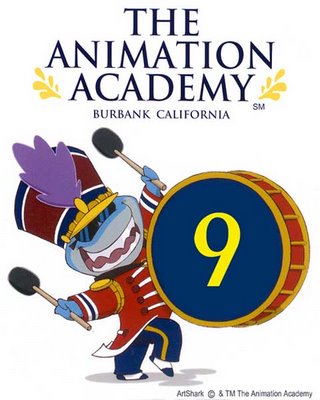 It was on the evening of January 19, 1998 when 20 students and myself gathered in the back room of the Coral Cafe, a local restaurant in Burbank, California and The Animation Academy was born!

Our school is an amazing story. Not just for its humble beginnings, but the success it's had through the success of our students. The Academy has affected the course of the animation industry in many ways in its 9 year history, and continues to do so to this day.

A big and cheerful thank you to everyone involved with the school. To our students, instructors, both now and from the past, and to our friends and fans.

Here's to a bright and creative future for everyone!

Charles Zembillas
Posted by Charles Z at 5:48 PM No comments:

Recent visitors to the Academy

We've been fortunate at the Academy to have so many top level professionals associated with the school as students, instructors and special guests. Here's a couple of artists who've made appearances at the Adult Session last semester.

Gregg Davidson is an established storyboard and development artist in animation. He taught at the Academy a few years ago and has recently published a book on storyboarding. His book is entitled "Cinematics Storyboard Workshop" and is a textbook we recommend at the school. For further information on Gregg Davidson's book, visit http://darabuka.com 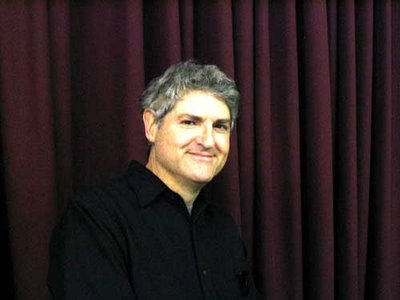 Another visitor of distinction was Neal Sopata. Neal is a highly talented effects animation artist who works on high profile projects. He enrolled at The Animation Academy several years ago to further develop his basic skills in traditional media. Since then Neal has gone on to become an award winning filmmaker. His animated short films are widely acclaimed. One of them will be playing throughout the year on BET in the US cable market. Another film of his was picked up by a local Hollywood studio and developed into a pilot for an animated series. 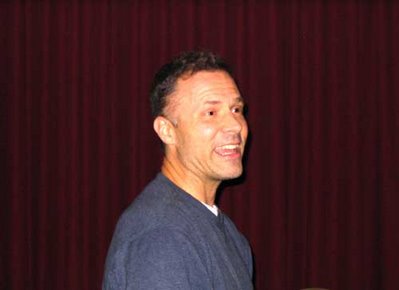 Gregg Davidson and Neal Sopata are among many of the industry's leading talents who frequent the Academy. In the upcoming Semester 10.2 this March, we've scheduled several more top level speakers who'll be announced soon for the Adult Session.
Posted by Charles Z at 3:42 PM No comments:

Intriguing artwork is something we've come to expect from yet another outstanding student of our Teen Program. Jorge Rodriguez joined the Saturday crew a few semesters ago and immediately began exploring unusual ways to express a theme. In this sample, Jorge developed an alternative image of Superman. Click on the picture for a better view. 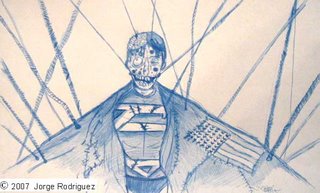 Jorge integrates textures and tones in his sketches, as well as different ways of approaching an idea. He displays a sophistication in his art that you don't normally see in a 15 year old. As with many of the students in the Academy's Teen Program, Jorge is another up and coming artist to watch.
Posted by Charles Z at 1:32 PM No comments:

It wasn't long ago when Alexa Gatti enrolled in the Academy's Teen Program. She's been with us for a few semesters now and got 2007 off to a great start with this head design sketch she created in class at our last session. Click on the image for a better view. 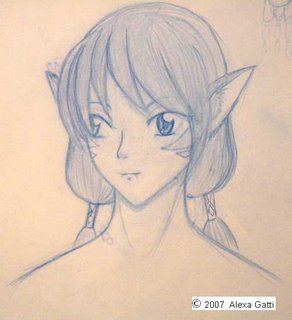 In this drawing, Alexa shows how strong her basic skills are becoming. She also displays a sensitivity that is evident in the expression of her character as well as in the execution of the design. All the more impressive considering that she only recently turned 13 years old. Imagine what she'll be doing in the future.
Posted by Charles Z at 12:35 PM No comments:

The Academy's new semester will begin this Saturday afternoon with the first session of the Teen Program. Hannah McCully's work is a good way to launch the blog for 2007.

Hannah enrolled with the Academy earlier in 2006 when she was 12 years old. She's an enthusiastic student who shows a lot of promise with her art. In the sketch below, Hannah created an interesting composition featuring a dreamy, surreal theme. She's made good use of overlapping design elements. She's also done a nice job with naturally posing her character as well as introducing tonal rendering into the mix. Click on the image for a larger view. 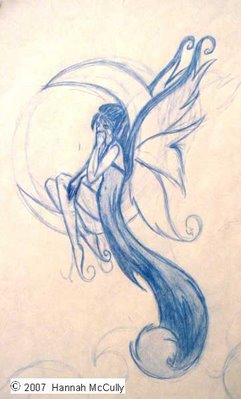 We're looking forward to Hannah's return to class this Saturday and the art she'll be creating in 2007.
Posted by Charles Z at 1:31 PM No comments: