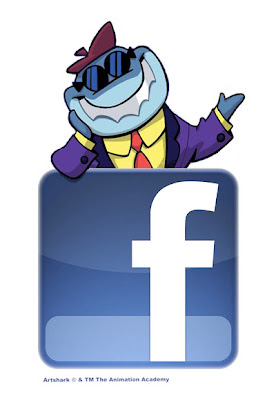 We've been so busy helping artists become the best they can be, some things had to wait. But we've finally activated the Facebook account for The Animation Academy. Thanks for your patience, folks. We're excited to be a part of this dynamic social network.

You're welcome to join us on Facebook. Like us, be a friend, tell your friends about us and help spread the word.

http://Facebook.com/TheAnimationAcademy
Posted by Charles Z at 9:40 AM No comments:

Wishing everyone at The Animation Academy, our students both past and present, to our instructors and friends, and to our friends the world over and to our visitors to the Academy's blog, to you and yours, a very Merry Christmas! 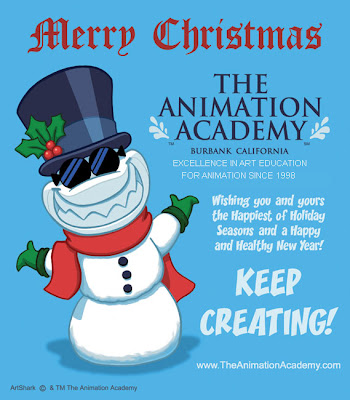 For educational purposes I thought I'd include the initial concept sketch for this year's Christmas card from the Academy. 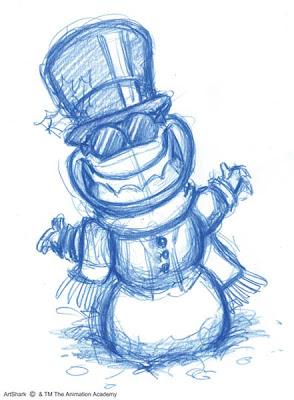 After I scanned the sketch, I drew directly over it in Photoshop, using one of the original computers from the Academy's lab at our old building, and a small out of date Wacom tablet from 10 years ago. Built to last!
Posted by Charles Z at 11:49 AM No comments:

I have a huge inventory of creative content, much of which has never been seen by the public. What better way to begin showcasing it than in regards to promoting The Animation Academy's upcoming Online Program.

Here's some promotional art I'm putting together. The first features the school's brand and ArtShark... 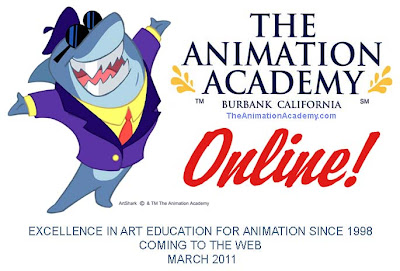 Next up, I've taken some character designs from the development of Sony's "Jak and Daxter" video game series and arranged them in something of a narrative, where the characters are conversing with each other. I've also included informative and promotional text.

Clicking on these images will give you a better view. 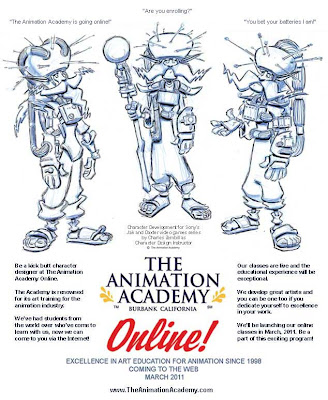 I've made use of some concept designs from a project I was developing for a DisneyWorld attraction involving the Pixar animated feature "A Bug's Life". I did these drawings in 1996 or 1997. This is the very first time artwork from this project has been published or even seen by anyone. I've had it under wraps for almost 15 years. 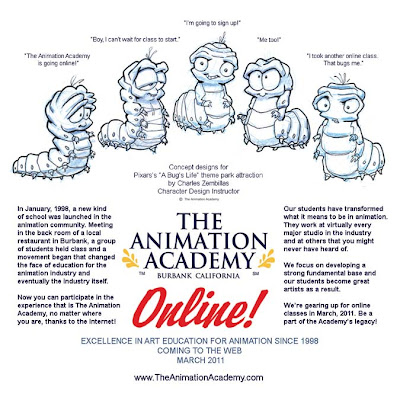 I plan on having a lot of fun with this, showcasing both new work and vintage art from my personal archives.

If you have questions concerning the upcoming online classes, please feel free to get in touch with us either by phone or email. Contact info is available on the school's website.

It's hard to belive that 12 years have gone by since ArtShark, the Academy's mascot, made his first public appearance. It was December, 1998 when he graced the cover of our schedules.

This is what he looked like back then, and this has since become part of the brand of The Animation Academy. The image was scanned from one of the original copies. 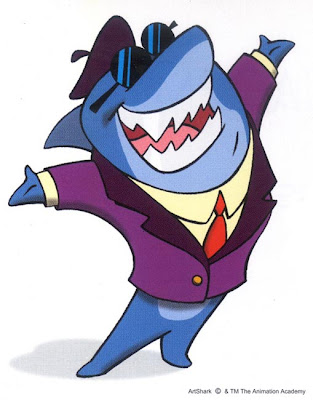 Few people realize there was a year of experimentation with characters before ArtShark came about as we know him today. In fact, this is the character and the artwork that appeared on the Academy's very first flyer back in December, 1997 as the school was getting ready to be launched. 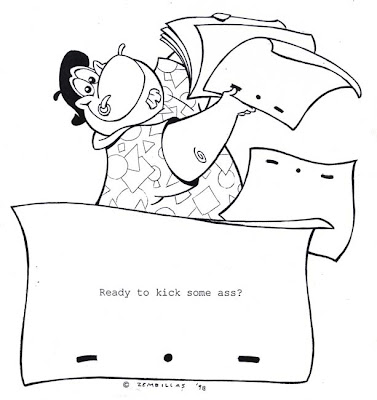 As part of the celebration of the character who's served the Academy so well, I've started a topic on the Gallery Forum of AnimationNation.com which will serve as an exhibition of ArtShark artwork throughout the years. There's rare images I've posted from the first year of the Academy's existence before ArtShark came about, and the story of how the character was developed. I'll gradually be updating it until all of the ArtSharks that've been created will be on display.

You're welcome to follow the topic and enjoy the show by following the link below.

http://www.animationnation.com/community/viewtopic.php?f=3&t=811
Posted by Charles Z at 12:17 AM No comments:

Online classes on the way 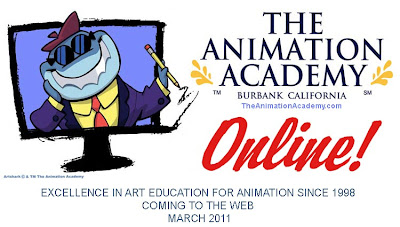 I'm happy and excited to announce that we're preparing for online classes at The Animation Academy.

We anticipate the launch of our online program by the first week of March, 2011.

We plan on offering a Masterclass Program in Character Design with yours truly as instructor, and a class in Photoshop Basics taught by Glen Moyes.

We plan on expanding the school online with a curriculum based upon our core classes in production design and development including at least two levels of Character Design and possibly three, Visual Development, and other key courses that would round out our current curriculum and build upon it.

More information will be forthcoming, but I wanted to take this opportunity to announce that our online classes are on the way.

Charles Zembillas
Posted by Charles Z at 9:31 AM No comments:

Here's a class demonstration that our Background Design and Perspective instructor Robert Gold created a couple of weeks ago. He batted this out like it was effortless. 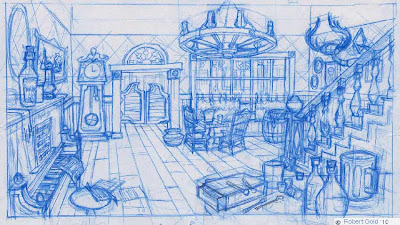 Robert came to the Academy as a student in 1999 and emerged as a great teacher. He's been with us ever since. He helped train many artists in BG Design and many of his students went on to professional careers.
Posted by Charles Z at 11:33 PM No comments: