On September 9, 2009, Chance Raspberry announced the premiere of his latest endeavor, his own channel on YouTube which currently features a promotional video with much of his personal and professional work.

Chance has been a major part of the Academy for nearly 10 years, taking classes with us at first, then enrolling in the animation program at California State University in Northridge while continuing his education with us. He received his Bachelors Degree from Cal State, and moved up to an instructor position at our school helping out with the Teen Program. Chance got his break when he was picked up as a staff artist on The Simpsons TV series and has become a fixture on the production crew for several years now.

For updates on videos and other news and projects that are happening with Chance, visit his blog at this link: http://ChanceRaspberry.blogspot.com

Chance ranks among the most successful students we've ever had at The Animation Academy, and it's very exciting and satisfying to see him expanding his Internet exposure. His outstanding talent is matched by the excellence of his character. Congrats to you Chance, and good luck. Keep Creating!

She started with us three years ago and since then, Amy Paulson has become a fixture at the Academy. Lucky for us, as we couldn't have dreamed of having a more charming and talented lady as part of our team. Amy is in charge of the students enrolled in our Team Program and functions as an instructor with us in that capacity.

On her own time she creates beautiful works of art, many of them with Disney as the subject. In this scene she's recently finished, Amy's created an undersea Disneyland in which all of the Disney characters she's featured are designed as if they were in the animated movie "The Little Mermaid". Amy drew the characters from memory and illustrated the composition in Photoshop. Click on the picture for a better view. 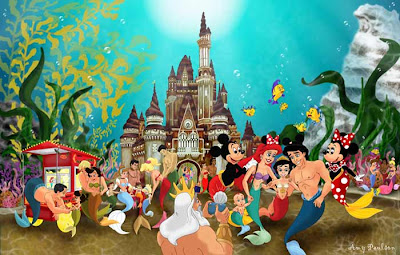 You're welcome to visit Amy's blog by following the link: http://www.amypaulson.com/
Posted by Charles Z at 3:00 PM No comments: