Students in the Character Design 1 class had a surprise on January 24, 2012. My good friend and long time colleague, the one and only Richard Chavez stopped by to spend some time with us, share his amazing art through no less than four portfolios, and offer a few design tips.

Richard is a legend in the industry. His career spans many years, starting with DIC doing TV animation work in the 1980s, to Disney Features, then on to DreamWorks, Sony Pictures Animation, and now back to DreamWorks once again. His feature work is particularly incredible as is his place in animation history.

He worked on Mulan, was among the original group of artists recruited from Disney by Jeffrey Katzenberg to start DreamWorks Feature Animation, co-art directed Prince of Egypt, designed on Spirit: Stallion of the Cimmaron, and also Sinbad.

He was literally, the very first artist to go on staff with Sony Pictures Animation when they launched their feature division. He went from Open Season, to Surf's Up, to Cloudy With a Chance of Meatballs, and is now spearheading Visual Development on new super secret projects at DreamWorks.

Here he is giving a few pointers during class. 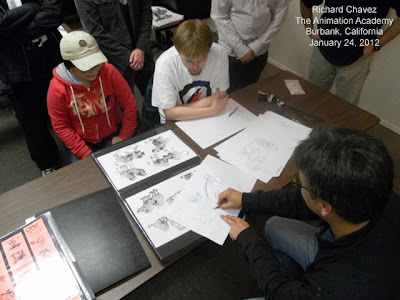 We'll be seeing more of Richard Chavez as we further develop our educational association with him. Meanwhile follow this link to the AnimationNation Forums to see more photos of his visit.
Posted by Charles Z at 4:28 PM No comments: