Kelly McGraw at the Academy

At the last session of the Academy we had a very special guest speaker. Kelly McGraw, long time Disney Feature Animation background painter and currently visual development artist. This was Kelly's first time ever making a public appearance to discuss his art and career. 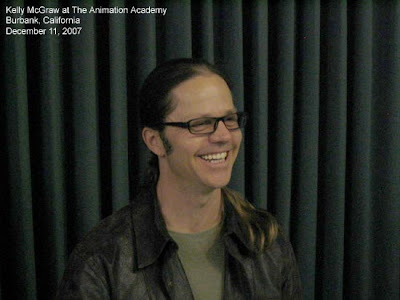 Kelly is remarkable. One of my first students from when I began teaching in the LA area. He started from humble beginnings taking figure drawing classes at local schools and workshops, developing his fundamental drawing and painting skills, to become a fixture at Disney. 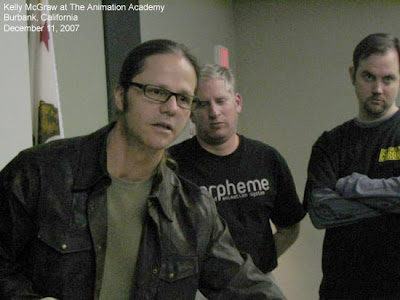 He had a captive audience in the students and instructors present. Kelly gave great advice for achieving a successful career in the very competitive world of animation, even in the face of dramatic changes that may affect the industry from time to time. A huge thank you to Mr. McGraw for the time he spent with us.

We're lining up guest speakers into the spring at the Academy. Next semester will begin January 8, 2008 and will mark the 10th anniversary of the school.
Posted by Charles Z at 7:52 PM No comments:

An occasion of historical significance from September, 2002. This photo and several others were recently discovered and sent in to us by the photographer of the event.

It's from Lilo and Stitch Night at The Animation Academy in Burbank, at the height of popularity for the film. Organized through the enthusiastic efforts of former student and then instructor John Nevarez.

Pictured below, from left to right. 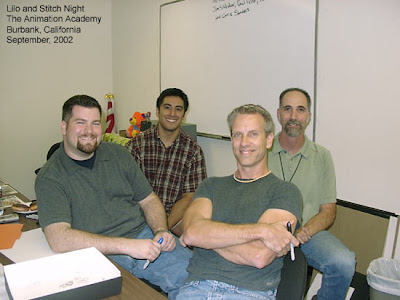 As far as I know, there has never been another occasion where the head creative staff of Disney's Lilo and Stitch team came together for an educational gathering such as the one that took place at the Academy in September, 2002. I'll be adding this to the school's archives along with the rest of the photos and follow up a little later with more pictures from that special night.
Posted by Charles Z at 12:47 PM No comments: