Big news in the animation industry as of late, and we're very happy to report it involves one of our star students.

Kris Anka has been with the Academy for several years, starting out at a very young age with our Teen Program, then progressing to work with the adults due to his outstanding creative abilities and skills. He's been featured before on the blog on April 7, 11 and October 28, 2006. He's also been featured before on March 19, 2007 in a photo which we're republishing here in honor of the news.

We're proud to announce that Kris Anka is the recipient of the very first Warner Bros/Hanna-Barbera Animation Scholarship. The announcement was made recently by Sander Schwartz, Warner Bros Animation President. The official press release follows the photo below, taken March 13 at the Academy as Kris looks over Stephen Silver's portfolio while Stephen autographs a book for him. 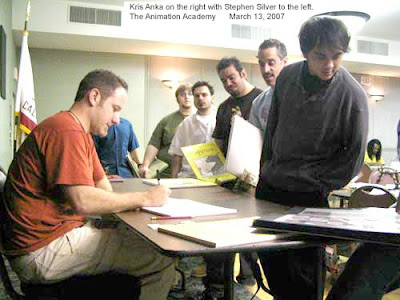 “Kris has been recognized by his instructors for his outstanding talent, passion and commitment to animation,” said Warner Bros. Animation President Sander Schwartz. “We are very impressed by his early animation and hope this annual scholarship will allow students like Kris to broaden their education in animation and hone their artistic skills. Through their accomplishments, they will honor the legacy of the great pioneers of animation.”

“I'm honored to be the first recipient of this scholarship as I've been a lifelong fan of the Hanna-Barbera and Warner Bros. cartoons and this gives me an incredible opportunity to further my education in animation,” Anka said. “I love animation – it allows me to experiment with life. I like being able to create a new person, to construct and exaggerate their world and how they interact with everything around them and, best of all, to see people laugh and enjoy those creations.”

Anka, who will enter California Institute of the Arts this fall, was selected from all applicants for the scholarship, which was created this year in honor of the late Bill Hanna and Joseph Barbera, and the great animation legacy of both Hanna-Barbera Studios and Warner Bros. Animation. Hanna passed away in March 2001, and Barbera died in December 2006.

As the recipient of the scholarship, Anka will be awarded a cash scholarship of $10,000, disbursed annually in equal amounts over the course of enrollment. In addition, Anka will be eligible for four consecutive paid summer internships at Warner Bros. Animation in Burbank while in college. Anka has chosen character animation as the focus of his studies.
-----------------

There's never been any doubt among the staff and students here at the Academy as to the success that Kris Anka will achieve. We're glad to see him receive this major recognition. Congratulations, Kris!
Posted by Charles Z at 4:06 PM No comments:

Patrick Morgan at the Academy

The adult session this past May 22 enthusiastically welcomed Patrick Morgan as a guest speaker. Patrick is a former Academy student who's gone on to a celebrated career as an artist in animation. Here he is with his latest creative endeavors, two self published full color sketchbooks and just on the market, his Whaleboy toy complete with interchangable facial expressions. 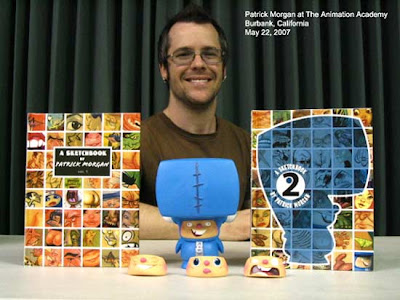 We're excited about what Patrick has happening with Whaleboy. It's currently in new series development at Nickelodeon with good prospects that it will get a green light and move forward into production.

Patrick is an outstanding character designer and visual development artist. He was very generous, encouraging and helpful with our students. His portfolio presentation was the highlight of the evening. To see more of Patrick Morgan's work, click on his name to the right of the page under the Academy Alumni links. Feel free to visit the site for his new Whaleboy toy: http://whaleboytoy.com

We're very appreciative of the time Patrick spent with us last Tuesday evening and we're looking forward to having him return as a guest speaker again in the not too distant future. Students and staff happily send their thanks.
Posted by Charles Z at 2:44 PM No comments:

Six Point Harness at the Academy

On May 15, we had the pleasure of welcoming four artists from Six Point Harness Studios in Hollywood. James Dylan Crowley, Phil Hernandez, James Krenzke and Tyree Dillihay spent the evening with our adult students, presenting their artwork and animation. The thing that distinguishes these four artists is that they all attended classes at The Animation Academy. They gave the school much credit in making a big difference in their skills, helping them to make the transition to a professional level. Here they are at the front table speaking to our students. The individuals are listed from left to right. 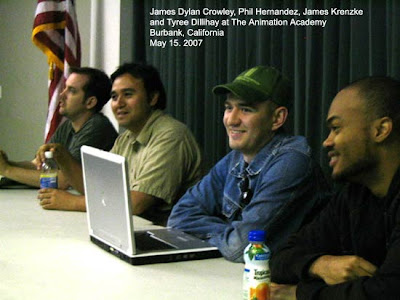 Six Point Harness is a studio which specializes in producing Flash animation. They create original projects as well as produce animation for local studios. Feel free to visit the studio's website by following this link: http://www.sixpointharness.com

Links to James Dylan Crowley, Phil Hernandez, James Krenzke and Tyree Dillihay can be accessed through the list of Academy Alumni to the right of the page.

Everyone in attendance was happy and appreciative of the visit by these four talented gentlemen. Their presentation was informational and inspiring and we hope to enjoy their company again in the future. A big thank you goes out to James, Phil, James and Tyree from students and staff.
Posted by Charles Z at 1:03 PM No comments:

We've been fortunate to enjoy the participation of Lizzy Singleton in our Teen Program for the past few semesters, and the time's come to feature her work. Lizzy has a unique design sense that easily emerges in her drawing. Here's her most recent class assignment. Click on the image for a better view. 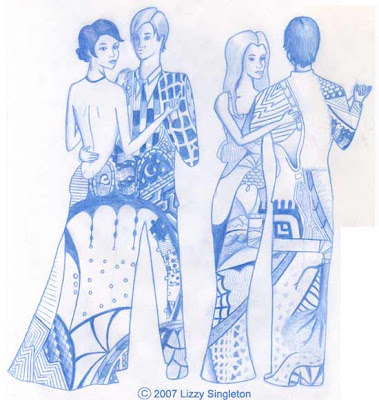 Lizzy merged a common design aspect of the characters in her compostion and used the shapes as a window to more of her art. She did an excellent job of interpretting the creative challenge she was given. Lizzy is a vibrant, enthusiastic student and a great example of why The Animation Academy is a special place.
Posted by Charles Z at 3:11 PM No comments:

It's always a good idea to explore your options when designing, be it a professional situation or personal work. That's what Trevor Waldron embarked upon when he created this array of possibilities for a graphic he developed with his client in mind. Trevor's been featured before on the Academy's blog on April 12 of this year.

In this example, Trevor's taken his basic design of a woman's head and worked many variations within the design of her hair, testing color and tonal values between the flower and her skin as well as slightly different versions of the shape of the hair. Click on the image for a better view. 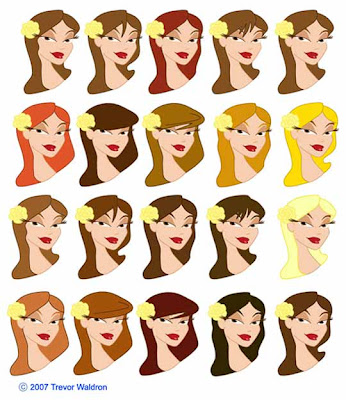 Trevor's done a fine job with this and I'm sure his client will be pleased with all the choices availble to them. Like me, they'll probably have a difficult but enjoyable time picking a favorite.

You can follow Trevor's art and activity by visiting bis blog at: http://trevorwaldron.blogspot.com
Posted by Charles Z at 1:14 PM No comments:

The Academy encourages productivity without sacrificing quality for quantity. Danny Picar keeps this axiom in mind when he draws. He's been featured before on February 14 of this year and September 25, 2006. In this latest example of his work, Danny has picked up his character design skills to explore concepts for several images he's exploring. Click on the picture for an enhanced view. 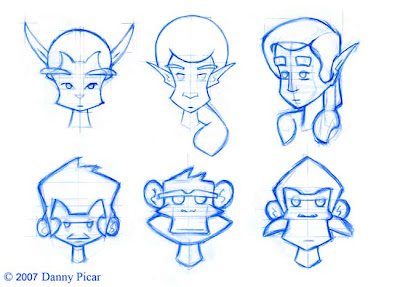 Danny uses blue pencil in establishing the construction and symmetry of his head designs in one pass, then extrudes his design statement as the image he intends to define emerges from the white of the paper. Danny is developing his own unique style which makes his work easily recognizable. The progress Danny's shown in the time he's been with us is commendable and the quality of his drawing contributes to the legacy of The Animation Academy.
Posted by Charles Z at 12:22 PM No comments:

It's rewarding for a student to return to our program and see the improvement in their art since they were last with us. Such is the case with Thirla Alagala. She's back with the Teen Program and her drawing continues to develop. This is her latest work from class. Clicking on the image will give you a better view. 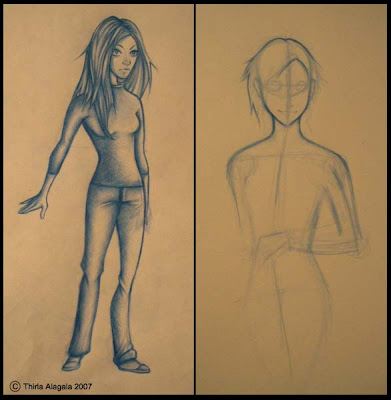 Thirla has been featured before on the Academy's blog on December 19, 2006. In this current example, her rendering skills have become more sophisticated. Also, in the drawing to the right, Thirla gives us a glimpse into the process she utilizes for constructing her composition. We stress fundamentals at all times with our students at the Academy. It's easy to see how the application of those fundamental principles affects a students art for the better when enjoying Thirla's sketches.

Looking forward to more from Thirla in the future.
Posted by Charles Z at 12:33 PM No comments:

A student who's made significant gains in her skills since she started attending classes at the Academy is Amy Paulson. She's been featured before on the Academy's blog on August 2, October 16 and December 13, 2006 and it's a pleasure to bring attention to her again as she develops her talent in Background Design.

This is some of her latest work, a class exercise in two point perspective. Clicking on the image will give you a better view. 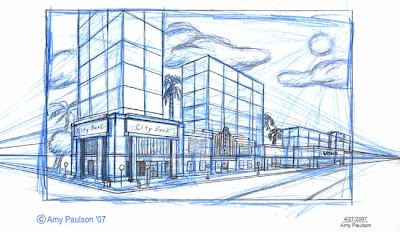 Amy has focused on Character Design and is challenging herself in Background Design. She's making the same kind of progress that we've been accustomed to seeing from the time she first enrolled in our program. By focusing on fundamentals, Amy will become as confident with her compositional skills in background design and perspective as she's becoming in other areas of her art.

To see more of Amy's work, visit her website at this link: http://www.amypaulson.com
Posted by Charles Z at 1:57 PM No comments: