She was one of the original founding students of The Animation Academy in 1998 and went on to become a professional Character Designer in animation and a children's book illustrator. Now the art of Larissa Marantz has been selected to be part of a 200 work exhibit in Washington DC in honor of Inauguration Week. Larissa is very talented and extremely intelligent, raising a family and touching everyone she meets with her smile, positivity and upbeat personality. She teaches now herself at the Laguna College of Art and Design.

Congratulations to you Larissa! We're very excited, happy and proud!

To read all about this accomplishment of hers and to learn more about her career, follow the link below to the online article from the Orange County Register:

Be sure to click on the picture of Larissa to see a slideshow of photos, including the painting of hers that was accepted into the exhibit. For a shorcut to the slideshow:

It's the anniversary of The Animation Academy! 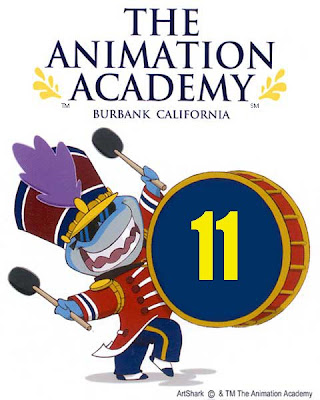 Here's the story of how we got started...

I was a part time instructor and head of the Animation Department at a school in Sherman Oaks, California known as Associates In Art, which is no longer in business today. A series of circumstances lead me away from Associates and I found myself helping someone else set up a new school at their request. This didn't work out, and by December, 1997, while hanging at the Coral Cafe in Burbank and talking with my friend John, the owner of the restaurant, he asked how things were progressing with this venture.

I said they weren't. Then he suggested that I start my own school in the back room of his restaurant. It could seat 20 people, I could book it in advance on one evening per week, and if this new endeavor didn't work, I owed him nothing.

We tried to think of a name for the school. After some frustration coming up with an idea, I made up my mind to give it the simplest name I could think of, The Animation Academy.

I had a mailing list (snail mail) of about 35 names of former students and friends that I used for sending Christmas cards. On my little 486 computer I came up with an unpretencious announcement of a new school starting up in Burbank. On the front page I posed the challenge, "Are you ready to kick some ass?" I spent approximately $15 on stamps and envelopes, mailed the announcement to 35 people, and waited to see what would happen.

John and I thought we would get between 5 and 10 responses. He suggested that if I got as few as 5, to go ahead with it anyway. By the day of the first class, I had sold all 20 seats.

With an investment of $15, I had raised over $5000 and we were on our way. I had an independent economy established in animation, and students had an alternative school they could come to that was affordable, oriented on fundamentals, and wouldn't saddle them with a debt that would take the rest of their lives to pay off.

Eleven years later, I look back at the trail of students we've had since that time and am amazed and thrilled at the success of a great many of them. More than I can keep track of. The Animation Academy in Burbank has changed the lives of many people and has helped change the industry.

Thank you to our students, staff, friends and colleagues on this special day.

Keep Creating, and keep banging the drum!
Posted by Charles Z at 12:40 PM No comments:

We had three very special guests at the latest session of the Academy this past January 13, all of which are accomplished alumni of our school.

Tyree Dillihay is to the left, John Nevarez in the center, Snakebite is on the right. 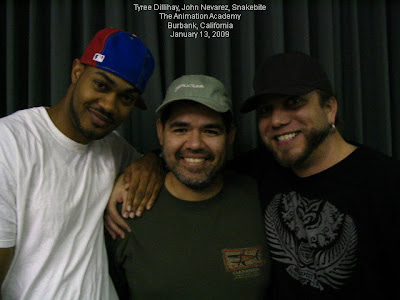 John Nevarez is a great Visual Development and Storyboard artist. He's just coming off of the upcoming Astroboy feature and is on to even greater things. He was our scheduled guest, and his presence brought out an outpouring of other alumni, three of which are featured in the photo above.

Here's a link to his popular blog:

Tyree Dillihay is best known for being the director of the controversial "Read A Book" animated video on BET from a couple years ago. Here he is nationally televised on CNN as part of a panel discussing the video:

Snakebite is one of the world's outstanding Photoshop artists. Feel free to view his work here:

This was a great evening. Everyone enjoyed John's presentation along with the other artists in attendance. Thank you John, and good luck to you with your new endeavors. Thanks also to Tyree and Snakebite. Best wishes to all and we hope to see you again very soon.

Next up will be Philip Dimitriadis on January 27.

A belated Happy New Year to our students, friends and associates!

2009 has gotten off to a great start at the Academy. We conducted our second session of the new semester last night. We have a large group of new students, along with a healthy representation of returning students. At last night's class, the great John Nevarez was our guest speaker. We also had a few other special guests showing up. I'll have photos from class posted soon.

Also for 2009 starting February 24, the last Tuesday evening of every month will be AnimationNation Night. We'll be hosting artists in the industry and students from other schools as our guests. More info forthcoming as it develops.

Thanks to everyone involved with The Animation Academy for continuing to build its legacy and for contributing to its greatness. Wishing you peace, prosperity and health in 2009 and beyond.

KEEP CREATING
Posted by Charles Z at 12:16 PM No comments: