We've had the pleasure of enjoying the company of Anthony Nevarez for several years. First as a teen student, now an adult emerging into more sophisticated subjects and style. In a recent class assignment seen here, Anthony delves into character design and female anatomy, using a classic form construction method. Clicking on the image will give you a better view. 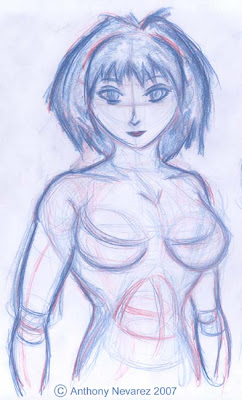 I'm happy to be featuring Anthony's work on the Academy's blog for the first time. Looking forward to the exciting images he'll be creating in the future.
Posted by Charles Z at 7:24 PM No comments:

The 52nd semester of the Academy is under way and we had a very welcome returning visitor with us at our most recent session.

David Colman, Emmy Award winning character designer, author of "The Art of Animal Character Design" and currently working visual development at Disney Feature Animation. Here he is after his presentation helping a student who wants to specialize in animal character design, while a group of students immerse themselves around his portfolio. 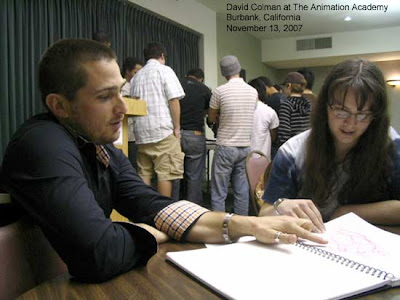 Thanks David! Everyone learns when you're with us at class. Always an inspiration and a good time in your company.

To see more of David Colman's work feel free to visit his blog: http://davidcolman.blogspot.com/
Posted by Charles Z at 4:54 PM No comments:

I've mentioned many times before on the Academy's blog the importance of creating a rotation of a character in relation to the animation production process. It's an aspect of our program which we strongly emphasize.

Here's an outstanding rotation from Jorge Merino. Jorge did this as a class assignment during his first semester with us. He's currently in his second semester. This was his first character model rotation. Clicking on the image will give you a better view. 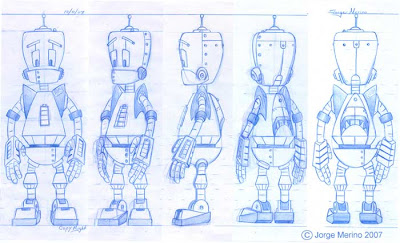 Talented students always get better when they spend time at The Animation Academy. Whether a beginner, intermediate or advanced, we always get very positive results and can continually showcase excellent artists such as Jorge Merino.

Jorge is challenging himself with new works he's creating in class and building on his affinity to rotate his concepts. Imagine what he'll be coming up with a few short weeks from now.
Posted by Charles Z at 9:03 PM No comments:

Spyro going to the movies!

The Hollywood Reporter, Variety and many other entertainment media news outlets have reported that the popular video game character "Spyro the Dragon" will be heading to the big screen as a feature animated film. Here's a link to the announcement on Variety's site:

I designed and developed Spyro for Insomniac Games and Universal Studios in early 1997. Needless to say, I'm happy to see the character make it all the way to the top of the animation market. The Spyro video game franchise has had more than $500 million in sales. The character is one of the most widely recognized video game personalities in the world. Here's a sketch I created of Spyro as a class demonstration in 2002. I used black line, color markers and some coloring pencil. 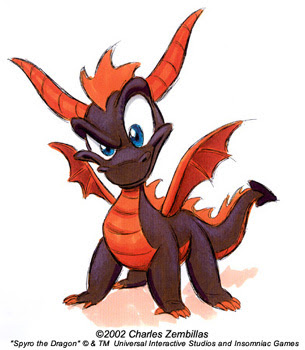 At the Academy we emphasize the importance of a marquis character or characters in the establishment of a character based franchise in animation and Spyro has turned out to be a wonderful example of that lesson.

The original development drawings of Spyro the Dragon have been online since 2004 in a presentation hosted by the school. This presentation has had continuous virtually non stop traffic since then with no promotion or advertising behind it, a testament to the popularity of Spyro and perhaps the educational value of the body of work. To view the Spyro presentation follow this link:

The Animation Academy is a world leader in the subject of character design training and intellectual property development. Insomniac Games enrolled their production crew into our program in 1998 early in the Academy's history. The Animation Academy has been influential in the animation industry on many levels.

Spyro is scheduled to be released sometime in 2009. Here's to hoping that the script is strong, the production values are high, and the film proves to be as succesful as the video games.