Hi everyone! It's been very busy so far in 2009 as many things are happening with the Academy and the people, groups and organizations associated with us.

On January 31, the Academy helped organize the 10th Anime Extravaganza at the Burbank Public Library. We're invited by the Library to do this on a yearly basis and this year as the ones that have gone before, was another great success. There were eleven professional artists, writers and personalities heading up the event with 142 kids and young people from the Burbank Library's Anime Club in attendance. Everyone had a lot of fun interacting with some of the greatest talent in animation.

Here's Chance Raspberry from The Simpsons drawing characters from the show for visitors. 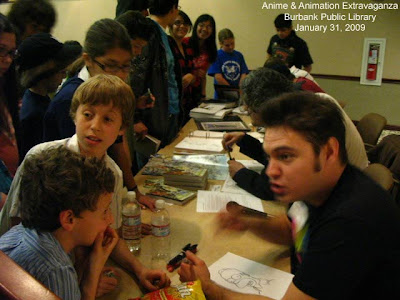 As many of you from the school may already know, the Academy has sponsored a very important website for the past 10 years. AnimationNation was launched 10 years ago on February 25, 1999 as an effort to initiate some much needed industry reform at the time, and has been very influential in the industry on many levels since then. The site has been primarily an online forum for animation professionals, students and serious fans. This past Friday on February 20, it was relaunched with a brand new format that will position the site for New Media and the future of Internet technology.

At the heart of the site is a video player that will give us an opportunity to build a vast archive of animation. We'll also be able to showcase artists and students in a high profile manner.

You can see the new site by following this link: http://animationnation.com/

We're very excited about this new development and will be discussing it further on Tuesday evening, February 24 at a special session of The Animation Academy. We're hosting the very first AnimationNation Night and inviting industry professionals as well as students from the animation program at California State University in Northridge, and of course our students.

The event is free, doors open at 7 pm. We'll be discussing how to develop AnimationNation Night into a monthly marketing and networking evening for artists. For more info, please follow this link to the topic on the AnimationNation forums:

Hope to see you there!