Nelson Boles makes it 2 in a row !

I'm very pleased, proud and excited to share the news with the Academy's community.

For the second year in a row, and in only the second year of the existence of this prestigious national recognition for high school students, the 2nd Annual Warner Bros Hanna Barbera Scholarship has been won by a student from The Animation Academy!

Last year it was Kris Anka. This year, it's Nelson Boles!

Nelson came to the Academy and enrolled in our Teen Program after his family and had been flooded out of their home in New Orleans, Louisiana in the aftermath of Hurricane Katrina. Nelson came to Los Angeles to stay with relatives and spent two semesters with us while he was here. He returned to New Orleans and continued with his life, drawing and animating films.

Last week, he was contacted by phone and notified by representatives of Warner Bros that he was the recipient of this year's scholarship - $10,000 to go to Cal Arts and a paid internship to Warner Bros Animation Studios.

This link will take you to a YouTube video of the film that won it for Nelson.

A huge congratulations going out to Nelson from everyone here at The Animation Academy in Burbank, California with our very best wishes for his continued success. We're looking forward to a great career from this very talented young artist, animator and filmmaker.

Recently enrolled into the Academy's program, twin brothers Donovan and Dorian Lopez made a strong statement in their first semester studying Character Design I. Below is Donovan's initial attempt at his 5 pose character rotation. 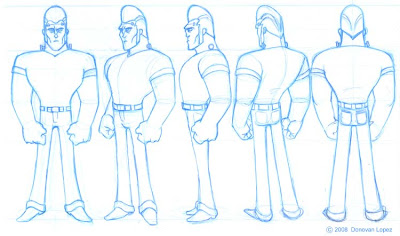 This is Dorian's first character rotation. Clicking on the images will give you a better view. 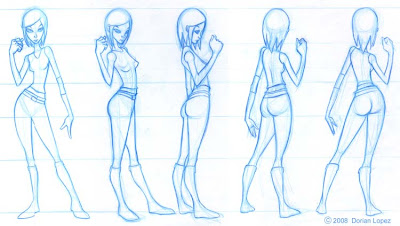 The Lopez brothers contribute to the Academy's legacy of excellence in art training for the animation industry by virtue of the commendable job they did with this all important assignment. Their character rotations are professional quality and would rival many designers already working in the business.

Donovan and Dorian have a bright creative future ahead of them and we're looking forward to what they'll be accomplishing next.
Posted by Charles Z at 5:58 PM No comments: