Hello to our many friends, colleagues and associates of the Academy. I want to bring you up to date on the new semester system we're going to try out in 2010 when the next semester is scheduled to begin on January 5, 2010.

Since we began in 1998, we've been numbering our semesters according to the year of our operation and the semester that was being conducted in that year. For example, 2009 and has been our 12th year, and the semester we're currently in is the 6th semester of the year. Thus, the semester is numbered 12.6. Althought it's numbered this way, it's also out 64th semester. The one starting in January will be our 65th consecutive one.

So instead of numbering them by the year, I thought we'd try something different and number them in chronological order. So in Jnauary, instead of semester 13.1, we'll be naming it Semester 65.

Also, in addition to the new numbering system, we're also going to change our enrollment policies. Up until now, we take in new students every other month when the new semesters begin. In 2010, we'll be accepting new students at the beginning of each month, overlapping the semesters. So in February, when Semester 65a begins, we'll take on new students and arrange for their particular semester to wrap up at the end of March. We're going to try this out and see how it works. You won't have to wait two months to get into our program if you miss the start of a semester, we'll be able to get you in sooner and get you up and running in advance.

So when you see the new semester numbers appear on our site, as they appear now, you'll know what's up.

Thanks everyone, and hope to see you soon at The Animation Academy in Burbank, the only place of its kind on earth.

Keep Creating!
Posted by Charles Z at 5:35 PM No comments: 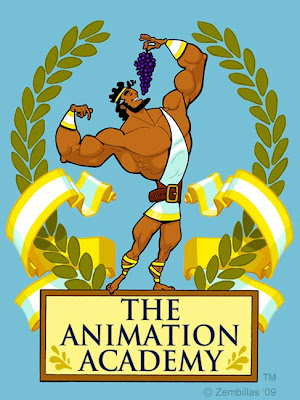 That's what we're known for throughout the industry and the world. The Animation Academy has an extraordinary legacy in developing fundamental skills that are necessary for achieving a successful career in animation no matter what your medium. Whether it's 2D or 3D, what you learn with us will enhance your talent and inevitabley improve your art. If you work in animation, if you work in a related creative field, if you're attending another school or just getting started, you'll benefit greatly from the strength of our program and the emphasis we place on developing a solid fundamental foundation, especially in the many areas of pre-production design and intellectual property development.

We're planning some changes in 2010 that will help move things along better for current and prospective students, including monthly enrollment as opposed to bi-monthly, and we plan on taking our program online and welcoming the many artists all over the world who would like to participate in the Academy's educational experience but who aren't able to make it to Burbank.

So stay in touch, I'll be updating you with news as things develop.

Keep creating! It's the key to your success.