Many of our students who've become successful in the animation business and in other areas of their art became assistant instructors with us first, after spending enough time in our program to qualify by virtue of the quality of their work and the professional standards they develop and exhibit. The latest I'm happy to say is Jay Fabares.

Jay's been with us for several semesters now. She's been a dedicated and diligent student, and starting with our next semester on January 6, 2009 she'll be inspiring and assisting other students with the basics of Visual Development.

Here's a small sample of the work she's created the past few weeks through in class assignments and on her own. Clicking on the image will give you a better view. 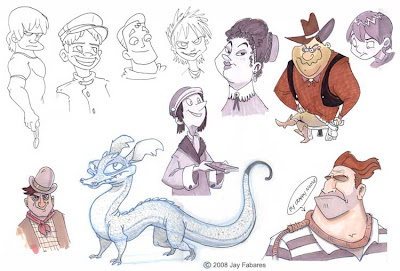 To see what Jay's been up to, visit her blog through this link:

Congratulations, Jay!
Posted by Charles Z at 2:38 PM No comments:

Peace On Earth, Goodwill To All Mankind

As we contemplate 2008 and everything that's been accomplished this past year, we're more excited than ever about what the future will bring to our students and friends. The Animation Academy will continue to help individuals develop their creative skills and affect lives in very positive ways as we have for nearly 11 years. There's nothing more joyous for us than seeing good people reach their potential and achieve great things with their art.

Thank you to our colleagues, associates and the many folks who've helped make our school a shining light in the creative community. May all your days be bright, and may all your dreams come true!
Posted by Charles Z at 5:10 PM No comments:

Our final class of the year was completed last night, and this makes for a good opportunity to post an update about a recent guest we had at the school.

Kristen Sych hails from Canada and was personally committed at a young age to pursue a career as a character animator. He eventually wound up in Los Angeles and enrolled at the Academy early in our history. His strengths as an artist, an animator and as a communicator made him an ideal candidate for an animation instructor, so Kristen filled that role for us for a long time.

Here he is in the company of some of our students and staff. He's the fellow in the center in front of the dark band in the curtain. 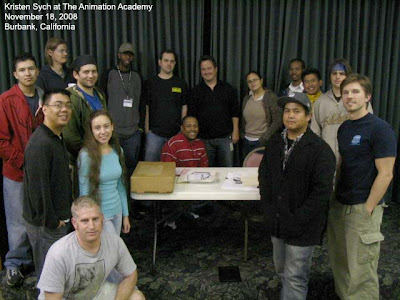 Kristen related how his foundation in traditional hand drawn animation and the fundamentals therein made him a stronger computer animator when he made the jump to CGI. He also spoke about how the medium of computer animation has made him a better animator by freeing him from worrying about every nuance of his drawing and focusing instead on the action, activity and performance of the character he's animating. He's currently an animator at Activision.

Kristen doesn't maintain a website or blog. He's in solid demand and hasn't had the chance to develop his Web presence yet. When he does, I'll be sure to post a link.

Thanks for spending time with us Kristen. Your visit was educational, inspiring, informative and entertaining. We hope to see you again very soon.
Posted by Charles Z at 2:56 PM No comments:

In honor of Walt Disney's birthday, I took it upon myself to visit his final resting place. It's discreetly hidden at Forest Lawn Cemetary in Glendale, California, the town next to Burbank. A friend of mine who used to work there knew where to find it, so we ventured forth this past Monday to pay our respects.

And here it is, a rare look at the garden area where Walt and his wife Lillian are intered. Click on the photo for a better view. 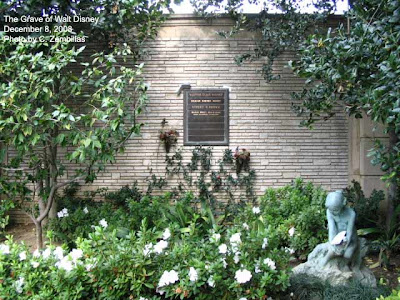 For more photos from my visit and info about Walt's gravesite, there's a topic in progress on the AnimationNation Forums.

Today is December 5, Walt Disney was born in Chicago, Illinois on this date in 1901. At the Academy, there's noboby in the art of animation whose memory we honor more than that of Walt Disney. Follow the link below to see a moving video tribute to this great man.

http://www.youtube.com/watch?v=td1jTaanU8k
Posted by Charles Z at 8:43 PM No comments:

Kelsey Mann from the archives

Some recent reorganization of the Academy's archives has uncovered a treasure trove of artwork from individuals who were once students here and have gone on to great success in the animation business. Among the discovered images are those created by Kelsey Mann.

Kelsey enrolled at the Academy as a new arrival to the LA area coming here from Minneapolis, Minnesota. He quickly made an impact with his art as he took right to the fundamentals we were teaching and incorporated these principles into his work. The samples below are from his time in our Background Design class, the first dated November 18, 2002 and the next dated November 19, 2002. The assignment was to come up with concept sketches for a cave exterior. 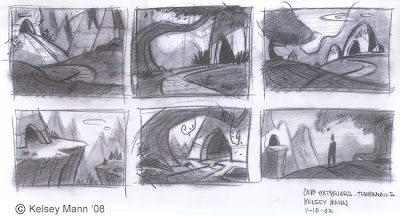 After some concepts were explored, Kelsey committed to a final design and created this composition the following day. Clicking on the art will give you a better view. 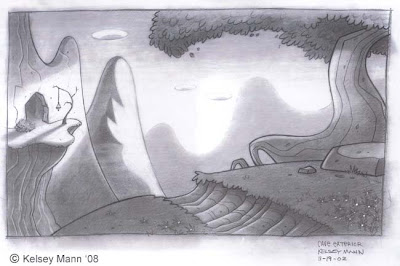 Kelsey went on to become an instructor with us and spent a few semesters in that capacity. It wasn't long before he was picked up by a major studio and his career went flying into the stratosphere.

For more info on Kelsey Mann and to see what he's been up to since his days at The Animation Academy, follow this link to his blog:

http://kmann.blogspot.com
Posted by Charles Z at 12:34 PM No comments: