Class demonstrations are a key element in art education. They serve as examples of how to approach both subject and medium. At the Academy, demonstrations have long been a part of our process.

Here's a demo I created during the latest session of the Teen Program. The lesson was in tonal contrasts and shape utilization. It was done in blue pencil, black marker and brushpen. Click on the image for a better view. 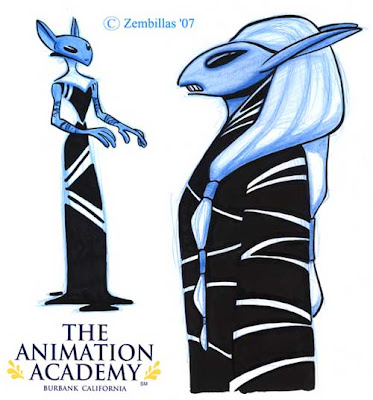 Demonstrations make a significant difference in the educational experience. Students become creatively motivated and develop confidence in the instructor. Demos are fun to do and are a great way for instructors to keep their own skills sharp. Everyone learns and gains from class demonstrations.
Posted by Charles Z at 6:03 PM No comments:

It was a real thrill hosting a very special guest at the Academy's adult session last week. Paul Felix, one of the most outstanding visual development artists at Walt Disney Feature Animation was the man of the hour and we were happy and honored to have him with us.

Paul presented his portfolio and everyone was floored when they got a look at his work. Development art from Mulan, Tarzan, Kingdom of the Sun (before it became Emperor's New Groove) and Lilo and Stitch to name a few. That's all he could show us for now since the work he's been doing on Disney's upcoming "American Dog" for the past 4 1/2 years is still under wraps.

Here's Paul speaking with a group of students as he presents images of his artwork from his laptop which is hidden from view when the shot was taken. 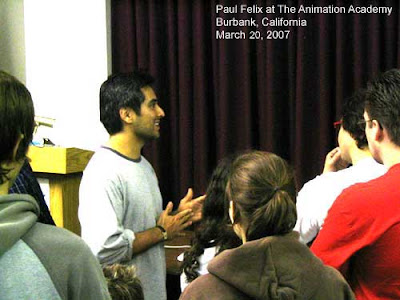 Paul is going through his development art at his laptop while conversing with an enthralled group of Academy students. 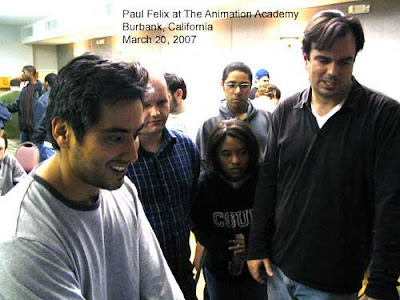 So that everyone could get a good look at the work Paul brought along for the evening, we seperated into a second group. One could be with Paul at his computer and the other could see his portfolio art close up and personal. In the photo below, a student is holding up a drawing for one group while Paul is in the distance at the front table with the other group. 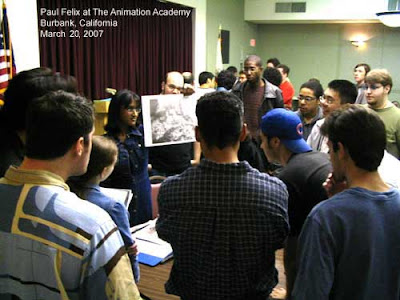 Paul listens as a question is posed to him by a student. 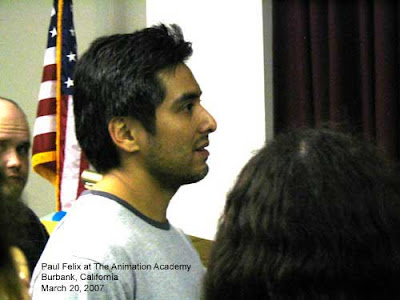 Our students were extremely appreciative that Paul Felix took the time to stop by and participate in the class. It was a terrific experience. He's a fantastic person, as humble and unpretentious as he is talented. Probably moreso if that's possible. Very generous, genuine and friendly. Thanks again for your visit, Paul. It left a big impression on everyone.
Posted by Charles Z at 9:56 PM No comments:

It's not unusual for students from the Academy's Teen Program to literally grow up with us. That's the case with Joshua Pina (pronounced PEEN-ya). Joshua's been attending classes for several years. He started as a gifted 11 year old, admitted early to the program due to his promising skills and maturity beyond his age. I'm happy to say that now at the age of 15, he hasn't let us down.

He's been featured before on the Academy's blog on June 14, 2006. The image below is one of Joshua's latest drawings. It's a profile view of a head design for a wolfman character he's developing. Click on the sketch for a better view. 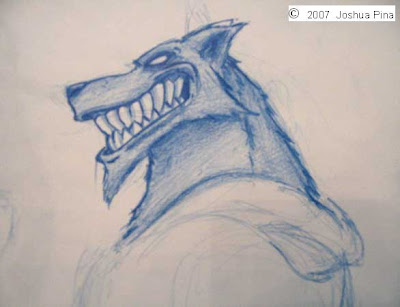 Joshua continues to impress us every time he comes to class. His artwork is in many ways approaching a professional level. He draws with confidence and his work inspires other students to excel. Be looking for exciting things from him in the future.
Posted by Charles Z at 9:01 PM No comments:

Stephen Silver at the Academy

Our latest semester is underway and it's a special one in progress. We have a series of guest speakers lined up for the Adult Program. Our first guest speaker joined us last Tuesday evening on March 13 as renowned character designer Stephen Silver visited the class and gave an outstanding presentation and lecture.

Here he is signing copies of his latest book for several students from the class. The student at the right of the picture admiring Stephen's portfolio is Kris Anka. Kris has been featured on the Academy's blog before on April 7, April 11 and October 28, 2006. 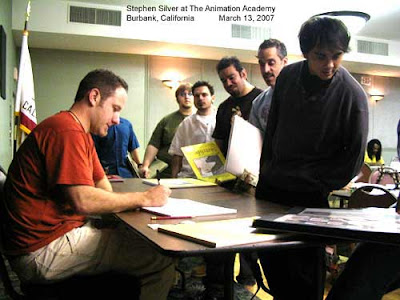 The story of Stephen Silver's career is an inspiring one. He attended the Academy in the early years although he was already working in the industry. It wasn't long before he started teaching with us and his remarkable talent made a big impact on our students. Today, Stephen is working at the Disney Studios where he's currently involved in the redesign of a popular animated TV series. To see more of his work visit his website at http://www.silvertoons.com.
Posted by Charles Z at 12:00 PM No comments:

Students who come to class prepared for our Character Animation curriculum are able to take advantage of the direction we offer if they bring a laptop computer and a drawing board or light box that has a registration bar attached to it.

Such is the case with Xavier Coton, a professional 3D animator who attends classes at the Academy to keep his traditional animation skills sharp. Xavier enjoys traditional hand drawn animation and understands how important and beneficial it is to his 3D animation, which is why he maintains this fundamental discipline. Xavier is given basic animation assignments at an advanced level to challenge him. He rises to that challenge in every instance. 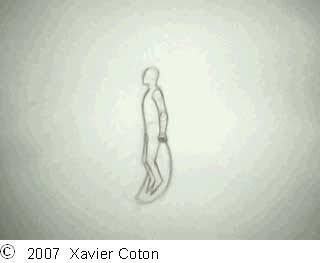 To view the actual animation, click on the link below:

Xavier's next challenge will be a collaborative effort with our Character Design students who would like to see their creations come to life. He'll be working with some of them to explore the movements and personalities behind those characters as one would do in a production situation. Can't wait to see what he comes up with.

For more of Xavier's work, visit his website at: http://www.animatorxc.com
Posted by Charles Z at 2:06 PM No comments:

Among our many students of distinction, Marlon Montenegro is special. He enrolled with the Academy's Teen Program way back in the day when it was first started in 1998 and periodically attended classes over the years. Today, Marlon is successful working in banking and continues to be a part of our school. He's been attending classes regularly while developing his design skills to a professional level as well as establishing his own style.

Take a look at one of his most recent character design compositions. Click on the image for a better view. 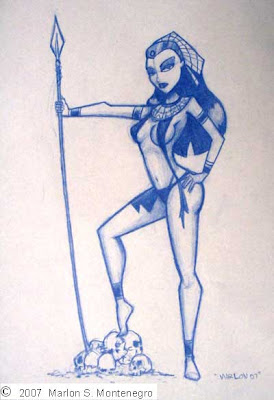 For the sake of comparison, take a look at what he was doing in his earliest days at the Academy. 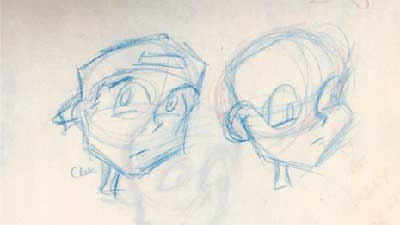 Marlon's growth as an artist and as an adult is the kind of personal achievement that has come to define The Animation Academy in Burbank.

Marlon has recently started his own blog. To see more of his more artwork, click on the link. http://marlonmontenegro.blogspot.com
Posted by Charles Z at 11:57 AM No comments:

The cutoff age for enrollment into the Academy's Teen Program is 13 years old. On occasion, when a student of special skill or enthusiasm would like to join the class, we'll make an exception and allow them to enter early. Such is the case with young Alexander Haney. At only 11 and in his first semester with us, he's already producing work that in many aspects approaches a professional quality.

This is his most recent class assignment. A basic four pose head rotation of a character he designed and is developing. Click on the image for a better view.

Rotations are an essential part of the character design process as they have a direct correlation to production. They're not easy to do, especially when created from one's imagination. Alexander did a fine job with his first rotation. Good enough to be featured here on the Academy's blog. We're looking forward to exciting things from him in the future.
Posted by Charles Z at 12:06 PM No comments:

In the beginning, there was Stephanie Mallon. Among the flagship class that launched The Animation Academy in 1998, she was unique in the group. Stephanie had a singular style and a witty sense of humor that was reflected in her art which she was encouraged to embrace. This example of her work is from a class assignment she created which we have archived. She used markers and a fine point black pen for rendering the composition. Click on the image for a better view. 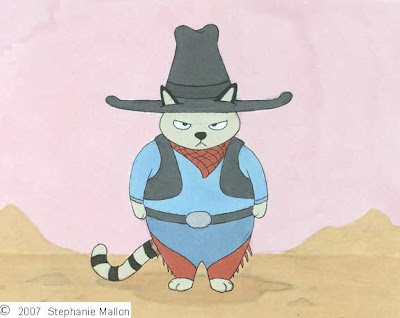 It was delightful having Stephanie with us. Today, she has her own line of specialty greeting cards which you can see by visiting her website at http://watermallon.com.
Posted by Charles Z at 12:45 PM No comments:

Commit to a theme

The new semester will be starting next week. As a reminder to new and returning students of the Academy, be sure to make a commitment to a theme for the upcoming sessions. Here's a sample of some ball point pen doodles I recently created. I was inspired by some music I was listening to and focused that energy on the development of character based images that are conceptually related. Clicking on the sketches will give you a better view. 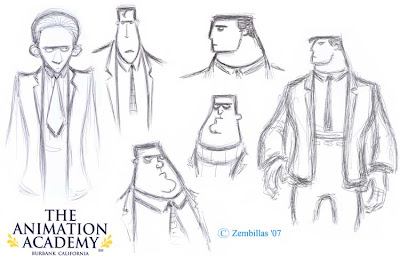 You can get a head of steam built up for the new semester by taking advantage of the break to get some personal drawing done. Even if it's just a doodle here and there, it'll help in keeping your skills sharp and your concept development moving forward. The school's motto is "Keep Creating" and we wholeheartedly encourage our students to adapt that discipline. Put your enthusiasm for your art to work by drawing as much and as often as you can.
Posted by Charles Z at 4:45 PM No comments: