The 10th Anniversary of The Animation Academy was celebrated on Saturday, January 19, 2008 at a special animation event at the Burbank Public Library, on the date of the school's first class in 1998. The event included screenings, portfolios reviews and a panel discussion with the audience. It was a terrific afternoon. Everyone thoroughly enjoyed themselves. The event was a huge success.

The panel of guest speakers included several from the Academy. From the left on the microphone, that's Walter Gatus from Sony's upcoming Spiderman series. Next to him is Bob Harper from Cartoon Network. Next to him is Gary Clair from Threshold Enterainment. Chance Raspberry from Starz Media is the second person over from him with the black t-shirt. Not pictured but to the left of Walter Gatus is Joe Pearson, renowned independent animation producer. 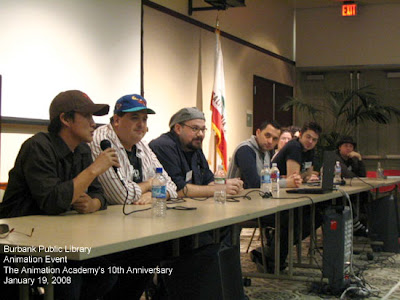 The panel looking from the other side, included guests from Tokyo Pop. The person on the opposite side of the table in the distance by the podium is Joe Pearson. 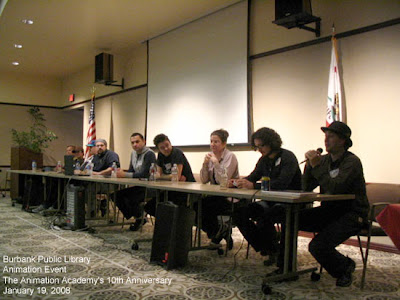 Here's a look at part of the crowd in attendance. 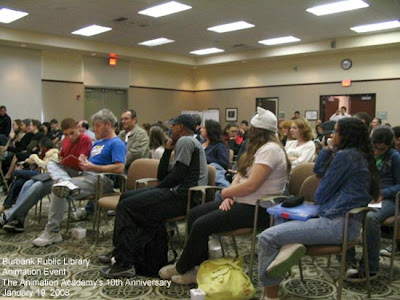 After the question and answer session of the event, the group spread out to speak one on one with visitors. Here's Gary Clair from the upcoming film "Food Fight", Chance Raspberry from "The Simpsons" and Walter Gatus from the upcoming "Spiderman" TV series. Three of The Animation Academy's many famous former students. 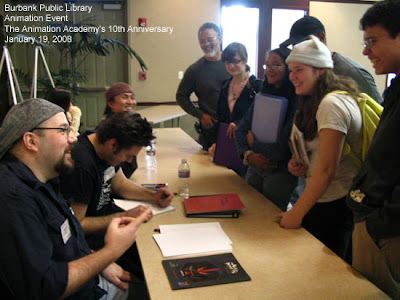 Looking the other way along the head table, the visitors gathering to speak with Walter Gatus, Chance Raspberry and Gary Clair. 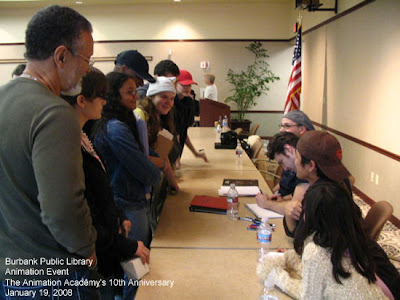 In class this week, our first guest speaker of the year was someone very much distinguished in the animation industry. Tad Stones took time to stop by and talk with our students. An incredible guest, he spoke at length about his experiences in animation. An amazing career spanning the Disney Studios through more than 3 decades. 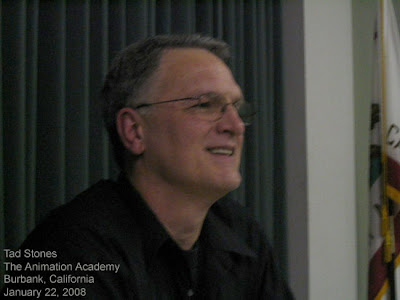 Tad's career from his time with Disney's training program in its earliest days through recent history and all the projects and shows he's developed captivated our group. Afterwards, students gathered round to speak with him personally. 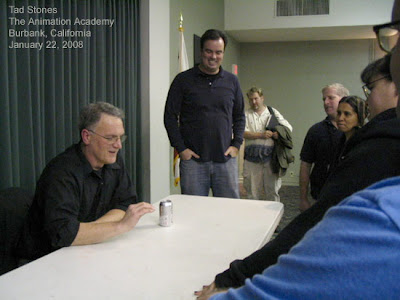 Here's Tad being thanked by a couple of Academy students who were grateful for his visit and inspired by his talk. 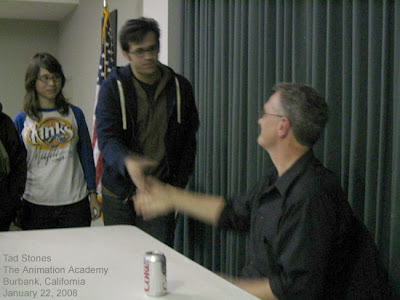 The IMDb database gives a glimpse into Tad's extensive and intriguing career.

A big thanks to Mr. Stones. He left a huge impression on everyone. Thankful for the generosity of his time and wishing him the best in all things.

We're tentatively scheduling our next speaker for this semester on February 12. When the final word comes in it will be announced on the Academy's home page.

Hello everyone and thank you for visiting the Academy's blog. A very Happy 2008 to you! It's been hectic recently with a large group of new students entering our program this semester and being caught up with preparing my first book which I'll disclose more info about later. So please excuse the delay in posting updates about what's been happening at The Animation Academy.

Today is a special day. It was 10 years ago that we held our very first class in the back room of the Coral Cafe Restaurant in Burbank, California on January 19, 1998.

It began at the suggestion of my friend, John Leousis, the owner of the Coral Cafe. I booked the back room of his restaurant and sent 35 flyers out to friends and former students whose addresses I had as part of a Christmas card mailing list. I had room for 20 students and sold out all the seats.

I spent $15 on stamps and envelopes. With that, a new business and a new educational endeavor was launched in Burbank for the community and the industry.

We'll be at the Burbank Public Library today, two stoplights up the street from the Disney Studios celebrating with a special animation event the library is sponsoring. Photos from the event will be posted soon.

Here's to the next 10 years and to the continued success of our students, instructors, associates and friends. Thanks again and God bless.

Keep Creating!
Posted by Charles Z at 10:17 AM No comments: