It was a very exciting session at The Animation Academy last Tuesday as special guest speaker John Watkiss joined us and blew our collective minds with his incredible art. John is a master whose experience involves the visual development of several Disney feature films including Tarzan, Kingdom of the Sun (Emperor's New Groove), Atlantis and Treasure Planet. 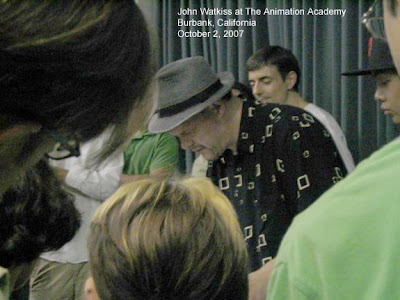 He gave us an extraordinary insight and detailed accounts about how many of the Disney features he worked on came to be, especially Tarzan. Here he is working with a group towards the end of class, relating his views on art and sharing a peek at development work few people outside the studio have ever seen. 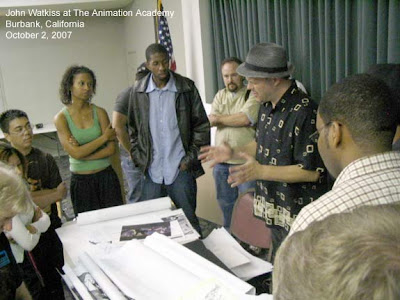 John Watkiss is an artist's artist. What he can do with a Sharpie and black Prismacolor pencil is astounding, not to mention his absolute mastery of acrylic painting. He trained artists at Richard Williams Studio in London during the production of Who Framed Roger Rabbit, he taught at the Royal Academy of Art in London, and he is without question one of the most incredible artists I've ever met.

It was a real honor and priviledge for us to host Mr. Watkiss and I hope he'll return again before too long. To see more of John Watkiss' work, visit his blog. http://johnwatkiss.blogspot.com
Posted by Charles Z at 10:07 PM