The creative legacy of the Walt Disney Studios was pioneered by great artists and animators. Among the greatest was Ollie Johnston, one of the legendary "Nine Old Men" and co-author of "The Illusion of Life" which helped resurrect the fine art of animation by educating and inspiring a new generation of talent in the 1980's and beyond.

On August 18, 2008 at the Sheraton Universal in Hollywood, the family of Ollie Johnston hosted a reception in his memory as he had passed away on April 14 of this year at the age of 95. I was invited to help set up for this event and while at the hotel, I met one of Ollie Johnston's sons, Ken Johnston. I had the opportunity to express to him my appreciation for his father and he was gracious enough to pose for the photo below. 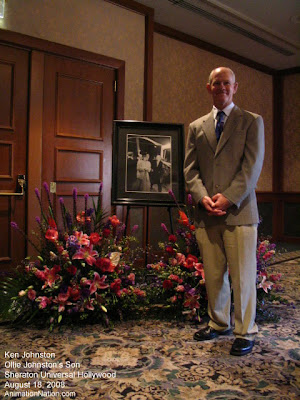 The framed picture you see next to him is a remarkable image which the Johnston family brought along as a centerpiece for the memorial event. It's a shot of his father, in the company of he lady who would become Mrs. Ollie Johnston, his mother, at the Hollywood premiere of "Fantasia" in 1940.

More photos are featured on the AnimationNation forums. Follow this link to view them:

It was a great honor being part of Ollie Johnston's memorial and representing The Animation Academy in this way.