The Academy has had many outstanding students over the years, and high in the ranks of those who've contributed to our legacy is Einav Deri. She's been featured before on the Academy's blog, starting with an entry on November 15, 2010, and again on June 13, 2011, and once more on October 4, 2011.

Einav came to us from Israel in 2009. She studied at the Academy twice. Everyone fell in love with her. From the humblest of creative beginnings, she returned to her country where she enrolled at the Israeli Animation College in Tel Aviv and took what she learned with us to new levels of excellence. Today, she's one of the top animation talents in Israel as her work is being featured in a national advertising campaign in which she designed the characters and much of the production. Here's a look at a billboard that showcases her work. Click on the image for a better view. 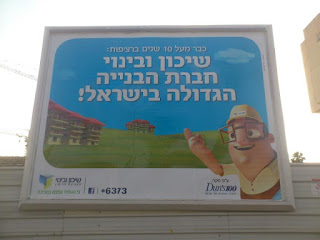 The billboard is one of many throughout Israel based on three animated commercial spots that will be airing on television, produced by Snowball Animation Studios in Tel Aviv. Follow this link to the AnimationNation Forums to take a look at one them.

We're super excited for Einav and looking forward to all the great things she'll be accomplishing in the future. Follow Einav's blog to see what's happening in her career.
Posted by Charles Z at 12:38 PM